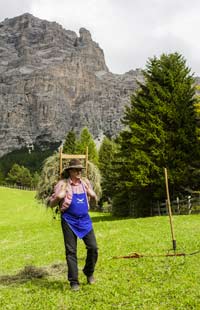 Its vibrant colour, an explosive blue, gives new sparkle to daily life.  Called “Gurmel” in the local dialect and “Schürze” in German, the South Tyrol apron is worn because of its distinctive practicality. In the land of Luis Trenker, concrete is blended, fields are grown, wood is chopped and plants are watered only when wearing the blue apron. Anyone who wants to be productive and end their day without a spot on their clothes possess at least one pair in the closet. The Riegler fruit grower, from lower South Tyrol, possesses at least twenty. “There are multiple uses for them”, explains the forty-year old worker. “The apron has a pocket, where I can stow pruning scissors or other small, useful accessories. If my hands are wet or dirty, I can dry them and clean them quite easily.”

What’s more, if rolled up and wrapped around the waist, it can even function as a small purse. Over the years, it has even become an advertising tool for various big and small businesses.

It is also a very charming garment: if sported over a white or check shirt with a dark jacket, it may even look like a smart choice.  This very humble piece of fabric clearly acquired great success, so much so that the so-called “apron style” is a hit among South Tyrol tourists, too. Everybody wants one. A veritable golden goose for weaving mills. Notwithstanding, wearing an apron without any decoration is like eating an unseasoned salad. You may find all sorts of messages, ranging from political ones, against taxes, to philosophical quotes, sarcastic comments on married life and lonely hearts column. For instance “Lustig und ledig” (A fun bachelor), “Lustig und durstig” (fun and thirsty) or “Selten darei” (Rarely at home).

The most sought after is “Mann mit Glatze sucht Frau mit Locken”, meaning “Bald man looking for a curly haired woman”. This is humour, South Tyrol style. You may also find very detailed decorations, from small flowers to proper Tyrolean coat of arms with a red eagle on a white field or animals such as a deer, horses and marmots.

“Made in China” is still not to be seen on these aprons. The original one with laces is “Made in South Tyrol”, of 100% cotton, all made with the finest garments. The standard size is 70x90 cm, unquestionably with a white hem and a red yarn. Today, this apron is used primarily as a protection instrument and for work, though its use is pretty much versatile. Its history is peculiar, too. Previously made of white linen, cotton was adopted towards the end of the 19th century and was primarily worn by peasants after Sunday Mass, clean and properly ironed, in the local square, to show what class they belonged to. Between 1900 and 1950 the contemporary blue apron substituted it. Women of the farmstead initially sewed it for their husbands. It then started to get produced on an industrial basis in the 1970s, and was updated and revised. Up to this day, whoever wears it on a Sunday, will have to lift one hem to show that it is a “day of rest”.